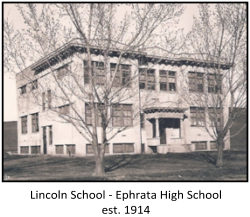 Early officers of the association included a president, first and second vice-presidents and a secretary-treasurer. The officers presided over the annual meetings which were conducted at banquets held during the week of commencement exercises at Ephrata High School. The class of 1923 was honored at the first annual meeting; adding eighteen graduates to the membership roll. The price of the banquet was $1.00 per person which, at today’s prices, would cost $14.18.

In 1932 the association initiated sixteen new graduates into membership of the alumni group. Because the association’s treasury balance was only ninety-eight cents, plans for the annual meeting’s banquet had to be downsized. The group held a “bonfire picnic on a beach near the shoreline of Soap Lake.” The May 4, 1937, Spring-time annual meeting, when another sixteen new graduates were to be initiated, was held without any of the current officers present. This could well be the beginning of the end of this phase of the Alumni Association of Ephrata High School. After that, the records either went missing or the organization may have simply ceased to exist.

Secretarial records indicate that the first alumni association dues were approved at $1.00 and were paid on a voluntary basis. Records also show that there seemed to be quite a bit of dissention among the membership regarding the amount that had been decided for dues. Proceeding forward from 1927 the amount of the dues assessment was greatly dependent upon the will of the members, resulting in an every-changing set of by-laws.

The association activities were funded in part by the income generated from the collection of dues. In addition, a “ways and means” committee was appointed to plan activities which would raise funds such as sponsoring dances and card parties. Because Ephrata High School students were not all from Ephrata, but from Soap Lake and the nearby rural areas, the events were held at such venues as the Bungalow or the Beach Hotel in Soap Lake and either the Twin Tavern or American Legion Hall in Ephrata.

Another income-generating project was the production of the school plays. The alumni “selected a suitable play and sent for sufficient number of copies of the play’s script” and made arrangements for the showing. Students were responsible to fill the roles of the characters and provide a presentation. Plays such as “Aaron Slick from Pumpkin Creek” and the Operetta “Tom Sawyer” featuring the Sunflower Girls were presented to the townspeople.

During the period of 1914 to 1937 the alumni association membership was comprised of socially-minded people. In addition to holding the annual banquet meeting in the spring, the members held Homecoming Christmas Balls in December. The homecoming events were planned for the members of the alumni who were returning home for the holidays. The December 28, 1929, Ball began with a banquet at the Beach Hotel in Soap Lake. Entertainment featured instrumental presentations, musical selections by the Girl’s Glee Club, readings and short speeches. Several members of the alumni were called upon to present interesting accounts of themselves for the past years. After the singing of the school song, “Orange and the Black”, the group adjourned to the Campbell-McDonald Hall in Ephrata where an evening of dancing and playing cards was in order.

There are no official records after 1937 but it has been reported that “the alumni of this time got together a number of times through the years. During World War II they met at the old Kachees Lodge in the Snoqualmie Pass area at what was referred to as the East-West picnic. Because of gas rationing this was determined to be the halfway point for Ephrata High School alumni living at various locations around the state. It was the case of good friends getting together on a regular basis.”

The preceding information regarding the history of the Alumni Association of Ephrata High School was found in its 1922 – 1935 secretarial records. The record book includes minutes, financial records, and lists of alumni by class. The book was generously donated to the association by Loretta Gover Gibbons, class of 1925, through her son Jerry Gibbons, class of 1949.

Fast forward seventy years to 2007 and the Ephrata High School class of 1957 is celebrating its 50th year reunion. During this gathering of former classmates a decision was made to find a way to support their alma mater. The group successfully collected funds for scholarships which were awarded to two member of the class of 2007 in the amount of $6,000.00 each.

In hopes of continuing the program to support Ephrata High School students with scholarships, an organizational meeting of the “Incorporators of Ephrata Alumni Association, a Washington State non-profit corporation”, occurred at Ephrata, Washington, on March 6, 2009. The incorporators approved filing Articles of Incorporation with the Office of the Secretary of State under the name of Ephrata Alumni Association. In 2013 the alumni association applied for and received Federal Income Tax Exemption status through the 501(c)(3) designation.

The 2014 Ephrata Alumni Association numbers 124 members. To qualify as a lifetime member of the association a one-time payment of $100.00 is required. Annual membership is available at $10.00; payable each year in January. The annual meeting of the association is to be held the second Monday of March. Additional meetings may be called by the either the association president, secretary or any two of the seven board members.

On April 10, 2012, a representative of the alumni association met with the newly formed Ephrata High School 100-Year Reunion committee. It was agreed that the association and the committee would join forces to plan and execute a reunion celebrating the 100th anniversary since the first class graduated from the high school in 1914. The celebration was scheduled for June 7, 8, and 9, 2014.

Beginning October 1, 2014, the Ephrata Alumni Association will begin the next phase of building a successful organization. The purpose of the association is to continue presenting scholarships to graduating seniors of Ephrata High School on a yearly basis and to support other purposes that will benefit the school. Growth in numbers as well as active participation in the association’s projects are necessary for success. Well-informed members will be the key; they will receive annual reports to keep them appraised of business and social activities.

The Ephratatigersalumni.com website has been developed with the intent of creating an interest in the association. The wide variety of information found on this site is available to members of the association as well as other visitors to the site. Graduates and friends of Ephrata High School are encouraged to visit the https://www.ephratatigersalumni.com website and keep informed of the progress achieved by the Ephrata Alumni Association.