In 2014 the Ephrata Alumni Association awarded scholarships to graduates Matthew Mortimer and Chance Flanigan, two very deserving individuals. Both young men have a wide variety of interests and are high academic achievers.

Matthew and Chance each received a $1,000.00 scholarship which was applied to their education fund at the college of their designation. The announcement and awards were presented by scholarship chairman Michael Lehmann at the annual Awards Program at Ephrata High School. During the EHS-100 Reunion Opening Ceremonies on June 7th, 2014, the honorees were introduced by association president John Mitchell. 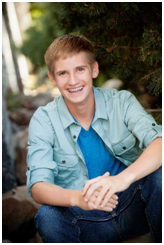 The volunteer work and personal activities of Matthew were as a Community Church of Ephrata Worship Band member, participant in Future Business Leaders of America and National Honor Society blood drives as an organizer/volunteer, Toys for Teens coordinator and board member of the North Central Washington Junior Livestock Show.

Matthew spent his high school years shaping himself into a well-rounded individual. Through sports, advanced courses such as college-in-the-high school, he learned much of his potential and will take the lessons learned at Ephrata High School to gain success in whatever field he chooses to venture.

The Ephrata Alumni Association is proud to have supported Matthew Mortimer in his quest for higher education and wish him success in whatever path he chooses. 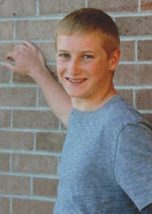 Chance is attending Big Bend Community College at Moses Lake. His education goal is to graduate from the school’s Commercial Pilot Program at the top of his class in order to be considered for a job as a flight instructor. His next step will be to complete his bachelor’s degree in the Commercial Pilot Program from Central Washington University at Ellensburg.

Chance served as a valued member of the Ephrata High School 100-Year Reunion committee. He impacted the committee in a positive manner with his enthusiasm and youthful perspective. His persistent attitude contributed to the construction of the school’s newly-unveiled Celebration Bell.

As a student at Ephrata High School Chance was involved as the Associated Student Body Social Chairman, was a Class Officer and member of the Student Council. He also participated in the Orange “E” Club, the Link Crew Club, and was a member of National Honor Society. He took a simple “more lighting” idea all the way to the school board for their consideration and approval. This resulted in $12,000.00 being funded by the School District for new lighting on the Ephrata High School campus.

Chance participated in football and track and field programs for four years and was on Tiger basketball teams for three years. He distinguished himself participating at State competitions, receiving team scholastic awards, and being chosen as an inspirational team player.

Chance volunteered many hours of service to his school; collecting bags full of recycled paper and assisting with the Toys for Teens program by raising money, selecting toys and delivery goods to underprivileged teens. He helped conduct the All-City Track Meet for younger kids and worked the school’s concession stand. In the Ephrata community he volunteered at blood drives, measured fish at the Ephrata Fishing Derby and served as a volunteer at Vacation Bible School. He is willing to sacrifice his time, effort, and hard work for others.

Chance attributes the Ephrata High School’s Advancement Via Individual Determination (AVID) class for preparing him to succeed in college and beyond. The class gave him the tools and confidence to go out and live his dream. 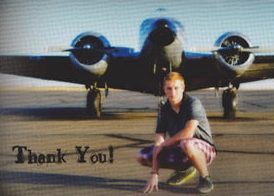 It truly is a great honor and privilege to receive this award. I cannot express enough how thankful I am. This money will be funding a lifelong dream I have had since I was a little boy. Although I can work as hard as I can to accomplish this aviation dream, it cannot be done without help from people like you.

Your generosity has provided me with a means to become a commercial airline pilot. I am honestly and truly grateful for what you have given me. Thank you for believing in me and investing into my future. 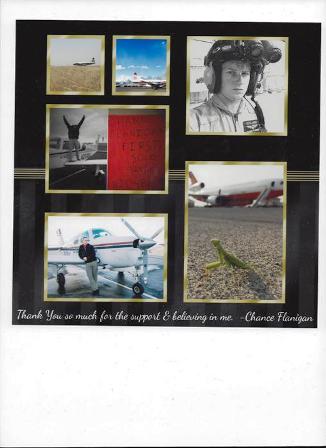 My name is Chance Flanigan and I am a past scholarship recipient of 2014. I am writing this because I believe that this scholarship committee should have a reserved window seat into my educational pursuits and future life as a pilot. The Ephrata High School Alumni Association scholarship has invested into my future, and for that, I owe them the courtesy of showing them what that investment has done for my family, my friends, myself and the community. I hope you find that this letter will reveal how much your scholarship has done for me.

I have successfully graduated from Big Bend Community College in the Fall of 2016. Because of bad weather and aircraft maintenance, I fell behind in the flight program which is why I graduated a quarter later than expected. Even though I was behind, I still earned an Associate of Arts & Science, Commercial Pilot Associate in Applied Science, and a private, instrument, and commercial pilot certificate. These achievements did not come without a lot of hard work, money, and time. Despite the amazing scholarship fund that I have received, I had to take on many jobs to keep up on the cost of flying.

There were days where I would work 16 hours straight between two jobs in two different cities. It was tough at times, but I knew I needed the money and it would pay off in the future. By the beginning of Summer of my freshman year, my hard work and determination paid off. A fellow pilot came up to me with an opportunity to work at the Air Tanker Base in Moses Lake. A week later the chief flight instructor came to me with another job that was a once in a lifetime opportunity. He told me I would be a safety pilot in a twin engine airplane flying low to the ground spraying chemicals at night with night vision goggles to kill mosquitos. Immediately, I thought "How could I pass this up?" Wanting to be more involved in the aviation world, I gave up my other two jobs to be able to work with the fire tankers and the mosquito patrol.

Summer of 2015 was madness. A typical day went like this for me: Wake up at 4 a.m., commute to Big Bend for flight training, fly at 6 and get done at 8, travel to tanker base and begin work at 830 until 2230, hop into the Skymaster and crop dust mosquitos until 2400, travel back home, sleep and do it all over again the very next day. This kind of schedule was the hardest thing I have ever done in my entire life. But, I LOVED every single minute of that Summer because I was surrounded by aviation. By the end of that Summer, I obtained my private pilot's license, flew 30 crop dusting missions, and was involved in record breaking fire year. It really was a great year for me.

I am currently taking the next step to advance in my education and career field. I am attending Central Washington University this quarter, winter of 2017, to pursue a bachelor's degree in Information Technology & Administrative Management. I chose this degree for two reasons: one, if I lost my medical license and no longer could fly, this degree would give me the opportunity to seek employment elsewhere. Two, I am very interested in learning more about the technology side of the business as well as what it takes to become a company leader/manager. I am also enrolled in the Air Force ROTC program. I plan on enlisting in the Air Force as an officer after I complete my degree and the ROTC program in the Spring of 2019.

Your generous fund has significanty made a large impact on my life and I will never forget it. I hope you find this letter interesting and hopeful. Within the next few years, I will update you again on my progress towards becoming an Air Force pilot. Until then, Blue Skies.