Invitation to a Tent Party 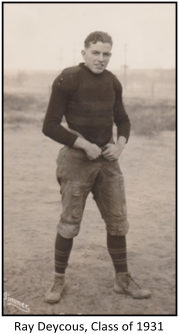 All Tiger football players and fans from the past are invited to participate in a tent party held by the Ephrata High School 100-Year Reunion Committee prior to the homecoming football game on October 25. Members of the 1986 and 1987 football championship teams are especially encouraged to attend.

A special feature to the tent party will be a drawing of the names of four alumni football players who will be given the opportunity to be on the football field and watch the game from the sideline with the team and coaches. Alumni football players must enter the drawing between 6:00 pm and the 6:45 pm drawing time.

The alumni football players and fans will form an alley entryway for the Tiger team when they come onto the field at the start of the game. Wear letterman sweaters, jackets – show your school colors! Come to homecoming, cheer on the Tigers and support the EHS-100 Reunion.

The Alumni tent party gathering was a lot of fun and was an opportunity for the reunion committee to share information regarding the 100-year reunion while enjoying coffee and cookies provided by Lisa Mayer Sears–EHS ‘81. Greg Harvill-EHS ’80 provided the tent which was much appreciated because it was a rainy, wind-swept evening. 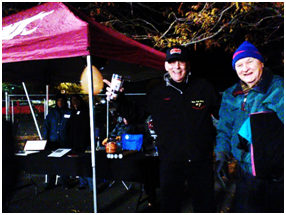 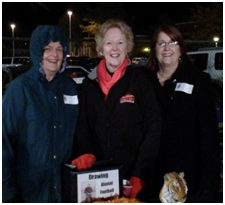 Four alumni Bryan DeHoog and Ron Deycous–EHS ’84; Rich Flanigan–EHS ’86, and Jerry Pitts–EHS ’55 had their names drawn for the opportunity to walk the sidelines with the coaches and team during the game. DeHoog and Flanigan had sons who were members of the current Tiger team. Associated Student Body representative to the EHS-100 committee and Tiger football team member Chance Flanigan planned and made arrangements for this activity. 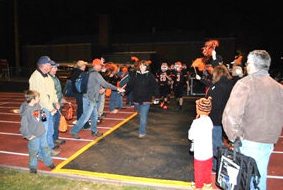 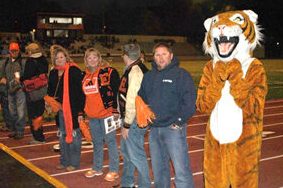 The alumni fans cheered on the Tigers in the traditional forming of the alleyway. The football team passed through the alley upon entering the field at the beginning of the game. Some of the fans included former Tiger athletes and cheerleaders: Jim Klein–EHS ’74, Amy Buchart Laird–EHS ’88, Kathy Cornwell Hilliard–EHS ’84 Greg Harvill–EHS ’80, Don Deycous–EHS ’55, Dick Mayer, EHS ’58 and the reunion committee members. 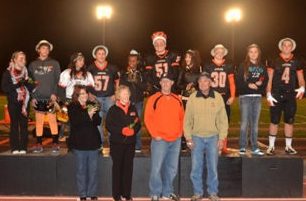 The reunion committee and alumni football players were given the honor of crowning the homecoming royalty at halftime. They were transported to the ceremony in a 1952 beautifully-restored Pontiac. Participating were Gail Smith and Bev Mayer representing the reunion committee and former Tiger football players Dale Hagy and Don Deycous shown left to right in front of the homecoming royalty.

The football game was exciting – the Tigers defeated the Grandview Greyhounds by a score of 62-18. This win was the third in a row for the team. The game was sent into the running clock mercy rule in the third period when they took a 42-0 lead midway through the frame. The win also put Ephrata senior fullback Dalton Balentine on the brink of a second-straight 1,000-yard season; he rushed for 137 yards and four touchdowns. Dalton Johnson, 8 for 8 in kicking extra points, also scored a 30-yeard interception return for a touchdown. The win put Ephrata into a four-way tie for second place in the Central Washington Athletic Conference.

The EHS-100 Reunion committee considered the Tent Party to be a success. Lots of camaraderie between former graduates of Ephrata High School and a chance to offer them an opportunity to support their alma mater by becoming members of the Ephrata Alumni Association.

For an additional report of Homecoming Week, click here: