In what was a sea of orange and black, alumni and friends of Ephrata High School filled the bleachers at Kiwanis Field. There were expressions of surprise and many happy faces as classmates met up with friends they hadn’t seen in years. From the 1938 graduation class to the most recent class of 2014 graduates, former Tigers came to celebrate the 100 years since the first class graduated from the school. It was a grand celebration. 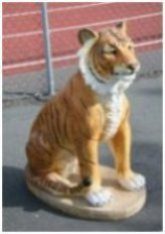 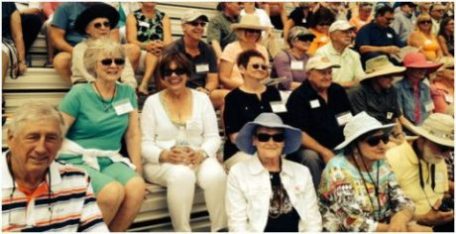 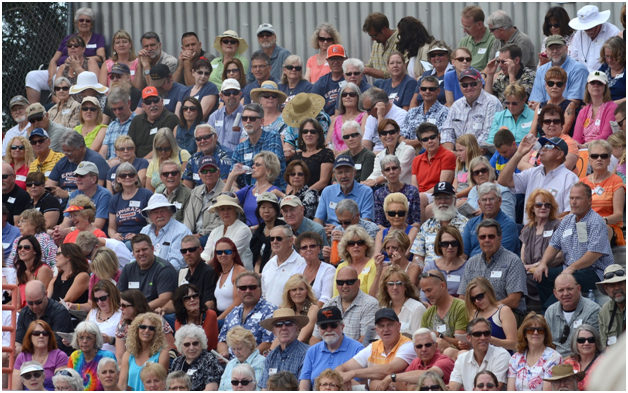 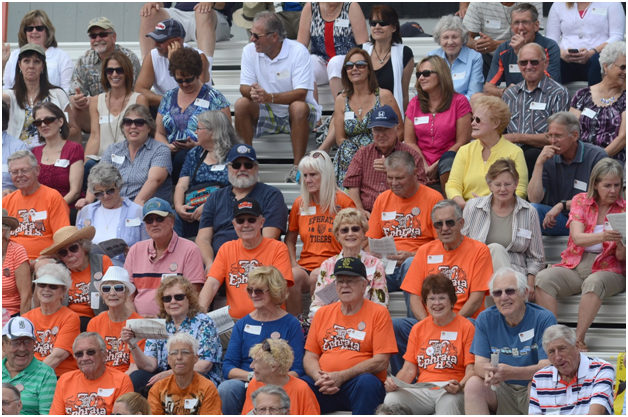 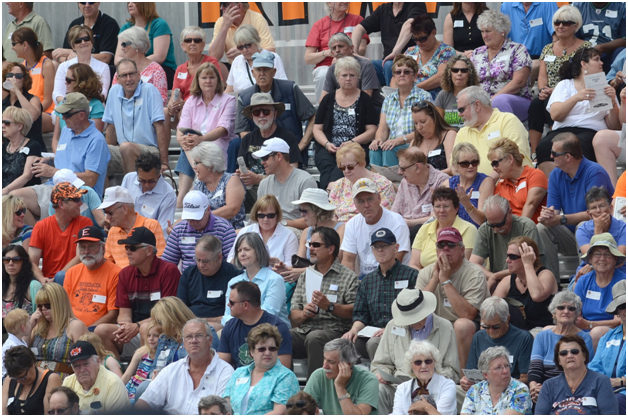 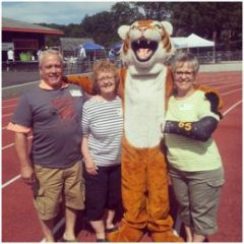 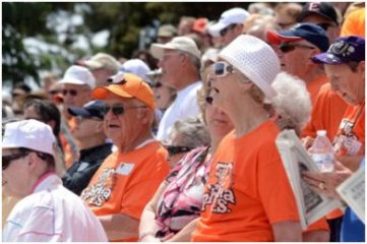 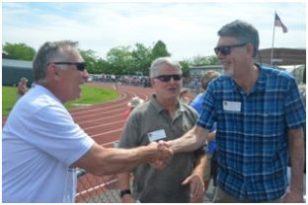 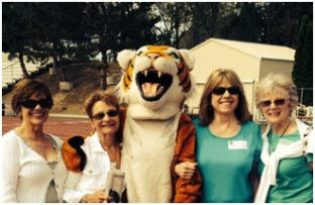 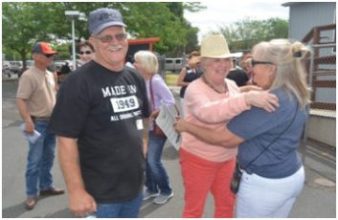 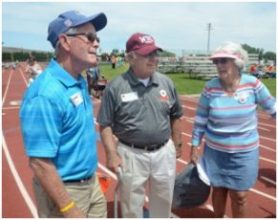 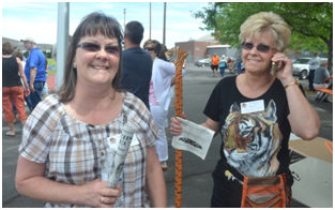 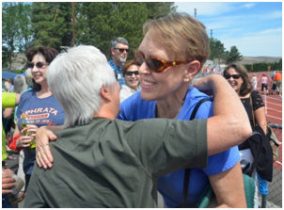 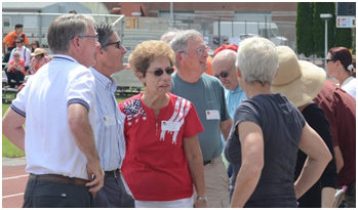 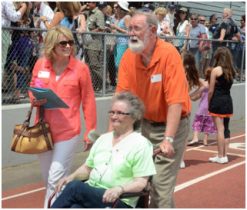 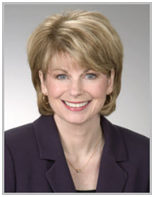 Former news anchor on Seattle’s KIRO and KOMO television stations Margo Myers presided over the opening ceremonies on Saturday. She welcomed everyone to the Ephrata High School 100-year Reunion celebrating the one-hundredth year since the first class graduated from Ephrata High School.

Margo recognized that 1327 guests pre-registered for the reunion with many more signing in at the gate; everyone here to recognize this memorable occasion. She thought it was great to see people of all ages, from a number of classes, who were at the reunion to rally behind their school, their community, and to recognize the eight thousand people who have walked the halls of Ephrata High School over the years.

Margo told of her great memories of high school classes – from Mr. Neff’s biology class to Mr. Johnson’s Social Studies, and Mr. Hamlett’s English to playing basketball on a great girls’ team, and spending many hours on the tennis courts with the tennis team. 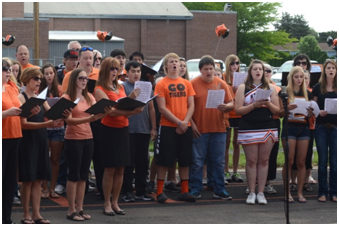 The mistress of ceremonies kicked off the event by announcing the singing of the National Anthem to be presented by a combined Ephrata High School Chamber Choir and the Ephrata Community Choir under the direction of Tim O’Donnell.

The audience participated in the Pledge of Allegiance which was led by EHS-100 Reunion committee student representative Chance Flanigan, class of 2014.

Next the EHS-100 Reunion committee recognized the oldest-known living graduates of Ephrata High School, class of 1938. The reunion committee vice-chairman, Jerry Pitts, class of 1955, presented the graduates, Elaine Daling Porter and Bill Robinson, in a 1937 Chevrolet Master Sedan owned by Jim McCullar. It was noted that except for short periods of time, Elaine and Bill have remained Ephrata residents and have been active in recording and preserving the history of Ephrata. In the early ‘60s, Bill served on the Ephrata School Board. Elaine is best remembered as the lady behind the soda fountain at Ephrata Drug. 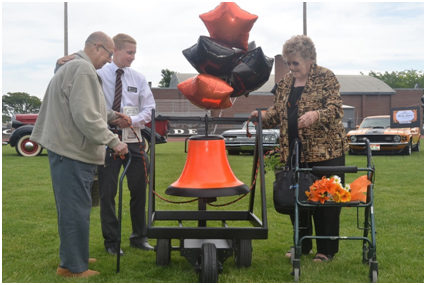 Then came the unveiling of the Celebration Bell. Chance Flanigan spearheaded this project and was joined by Elaine and Bill for the unveiling and the ringing of the bell. The project was the combined effort of the 100-year committee, the Ephrata High School student body and members of the 2014 graduating class.

Margo noted that Ephrata has always taken great pride in the quality of its schools and that doesn’t happen without solid leadership at the top. She invited the Superintendent of the Ephrata School District to the podium. 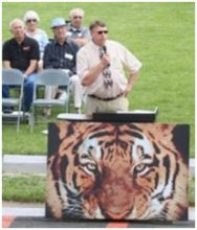 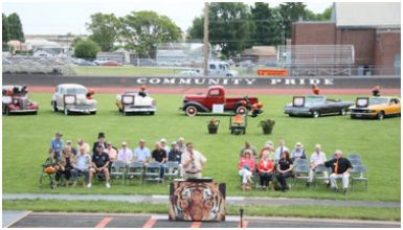 Dr. Jerry Simon welcomed the attendees back to celebrate 100 years of excellence. He commended the district for providing students with a quality education over these past many years. Strong community support and a continuing commitment towards school improvement has led to success. He said senior graduation averages about 95 percent – a high standard.

Simon thanked the audience for their positive contributions and support during the first 100 years. 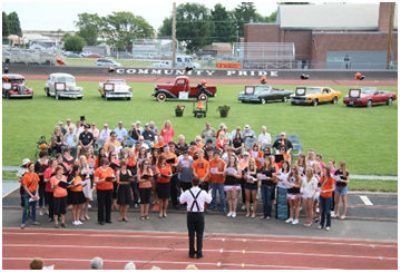 Next to be announced was a special performance of the original school song from 1911, “Orange and the Black”, which is the same year the school mascot, the Tiger, and the school colors – orange and black – were designated. This arrangement was by the Ephrata High School music theory class and presented by Director Tim O”Donnell, high school choir members and the Ephrata Community Choir. 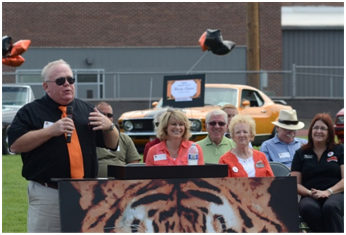 Mistress of ceremonies Margo Myers noted that an event the size of the 100 year reunion couldn’t happen without the support of the city and community. She introduced Mayor Pro-Tem Bruce Reim, class of 1971, who welcomed returning alumni on behalf of the City of Ephrata. Reim humorously described how the landmarks of the city had changed over the past 100 years and caught everyone up to speed on what to expect as they toured around the city during the reunion weekend. 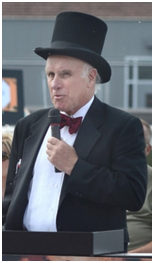 Jerry Handfield was introduced as being uniquely qualified to give a keynote speech regarding the fascinating history of this region and how it applied to school-age children. He led Washington State’s Archives staff, launching the Washington State Digital Archives in 2004. After 25 years as State Archivist, he retired in January 2013.

Handfield noted that the quality of education has served as a foundation for the community over the past century. He spoke of the changes that have transpired in 100 years; in 1914 local students may have spent time rounding up wild horses and jackrabbits and, as women, the first three graduates of EHS – Blanche Pierce, Adaline Sanders, and Katherine Kirkpatrick - did not yet have a constitutional right to vote.

“Fast-forward to today, with the technological revolution that puts a wealth of information, communication, and social media at our fingertips,” said Handfield. 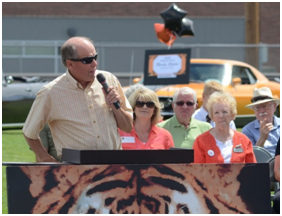 Margo reminded the audience that, “None of us would be where we are today without great teachers. One of my personal favorites, and someone who well represents the teaching ranks from Ephrata, is someone many of you know, or even had as a teacher or coach.” With this introduction retired Ephrata teacher Dave Johnson took over the microphone.

Befitting his reputation as a much-requested speaker, Dave Johnson did not let anyone down. His characterizing of different types of teachers drew many laughs from the crowd. His manner of speaking caused many of the “old-timer” alumni to comment, “What would it have been like to have a teacher like that!” Ephrata is fortunate to have quality teachers and Dave was a good representative, one who is greatly respected. 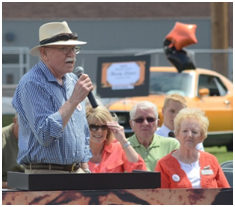 Ephrata Alumni Association scholarship winners, Chance Flanigan and Matthew Mortimer from the class of 2014 were awarded scholarships in the amount of $1000 each. Presentation was by association president John Mitchell. Both young men were noted to be very deserving of these awards. The alumni association is seeking new memberships so that they can carry on this program.

The mistress of ceremonies Margo Myers closed out the program by asking the alumni to stand and join in the singing of the Tiger Fight Song. Ephrata Community Choir under the direction of Tim O’Donnell joined with the Ephrata High School band directed by Larry Anderson and Tiger cheerleaders for a rousing rendition of the current “fight song” penned by Doris Correll Matlock, class of 1949. 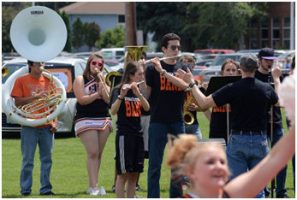 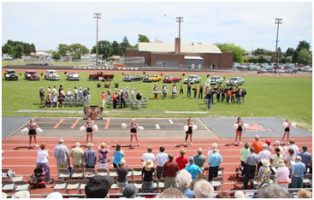